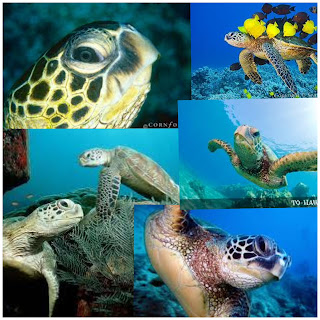 Green Sea Turtles have been swimming in the world's oceans for over 200 million years.

The ancient Hawaiians called the Green Sea Turtles in Hawaii's waters honu and many of their earliest myths tell stories of the turtles, yet the royalty also enjoyed the meat of the turtle as food.

An adult Green Sea Turtle's shell can measure more than three feet in straight length, and weigh 220 pounds. The term "green" applies not to the external coloration, but to the color of the turtle's subdermal fat. The shell of adult Green Sea Turtles is light to dark brown, sometimes shaded with olive, with radiating wavy or mottled markings of a darker color or with large blotches of dark brown.

The Hawaiian Honu and its Meaning
There is a petroglyph or ki’ pohaku of a turtle or honu found in the Pu’u Loa lava fields on the Big Island Hawaii – although the meaning of most of the petroglyphs have been lost through time, the turtle has always had held special meaning to the Hawaiians.

The petroglyph shows a simple sketch of a turtle with its four flippers out as if swimming in the ocean, and a vertical line down its shell. The turtle also symbolizes the navigator that is able to find its way home time and time again, just as in real life, the green Hawaiian turtle will swim hundreds of miles to its own birthing place to lay eggs.

Honu as Aumakua
The honu is also revered as an Aumakua or guardian spirits that can take the shape of any animal. It is in mythology a bearer of good luck, a frightening monster to be released among enemies, a living bridge that brings two lovers together and the foundation of some of the islands. There is even a hula honu which closely imitates the action of a turtle furiously digging through the sand for a place to lay its eggs

Ancient Hawaiians were animists and believed that their Aumakua or guardian spirits could take the shape of any animal. These guardians were also viewed as the embodiment of their ancestors. The green Hawaiian turtle is the only indigenous reptile to the Hawaiian islands, is revered as a sacred symbol of the life force and could only be consumed by the royalty or ali’i for its attributes of longevity and endurance. Members of the honu clan in old Hawaiian however refrained from eating the turtle

The ancient Hawaiians used every bit of the honu – its flesh and cartilage were made into soup or stew and even the internal organs were cooked and eaten Its shell was broken into pieces for tools, such as fish-hooks and as an instrument to scrape the bark off the paper mulberry tree or wauke. The bark was then used to make the tapas cloth. The skin of the honu was made into leather.

The honu was also presented as an offering to Kanaloa, the God of the Ocean, who was also believed to assume the shape of the honu when he needed a physical form.
Have you ever had the pleasure of seeing a Honu? Please share your experience and what this wonderful sea creature means to you.
Aloha
Palolo Bob
Posted by Palolo bob at 9:20 AM